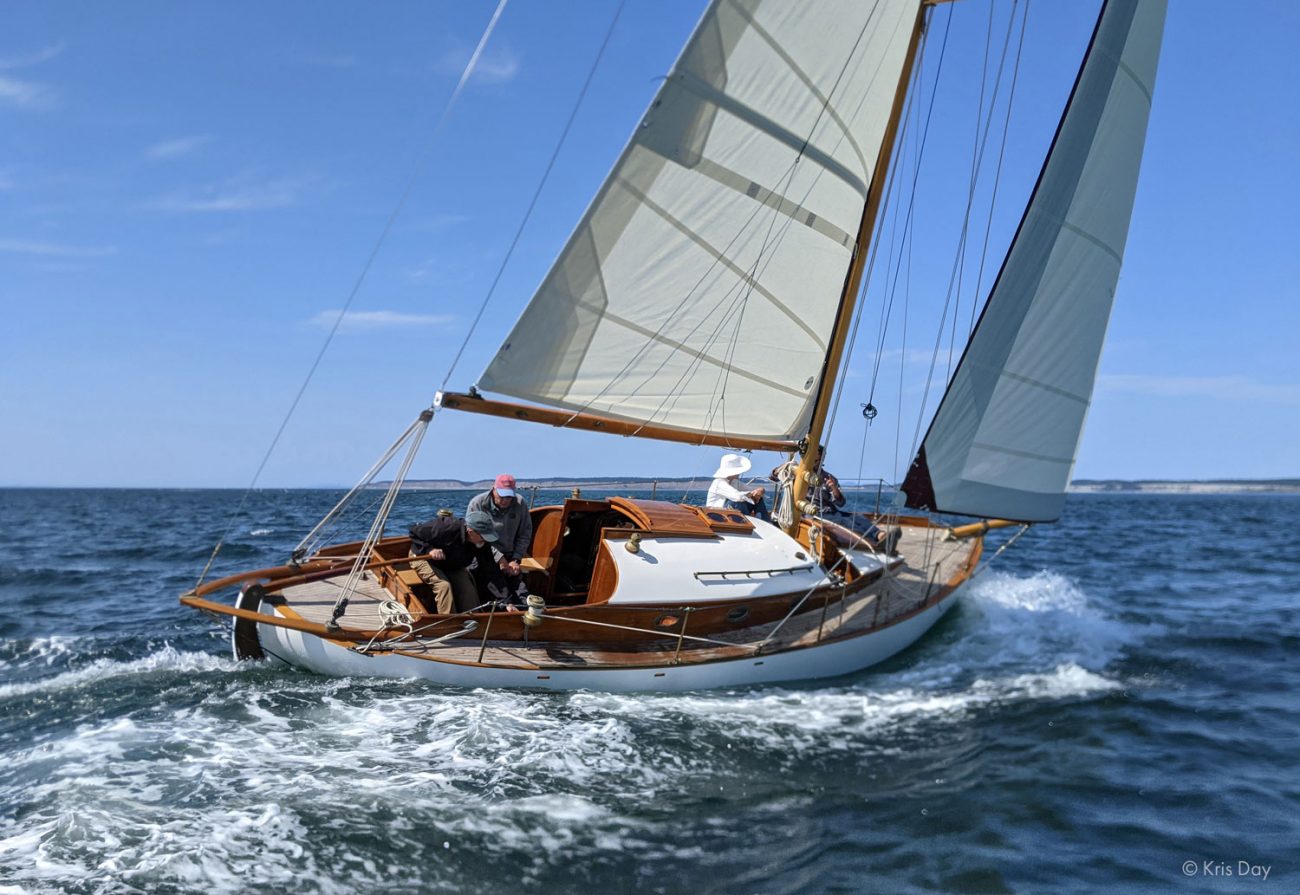 For me, working on classic wooden boats is about values. Good design: these vessels are drawn for seakeeping—finely tuned to their purpose and environment, highly functional, and incredibly beautiful at the same time. Fine construction: these boats had to be well-built to survive a variety of wind conditions, sea states, and weather events, both expected and unexpected. Long-lasting: they had to be both durable and repairable by people far from home with simple tools and accessible materials. 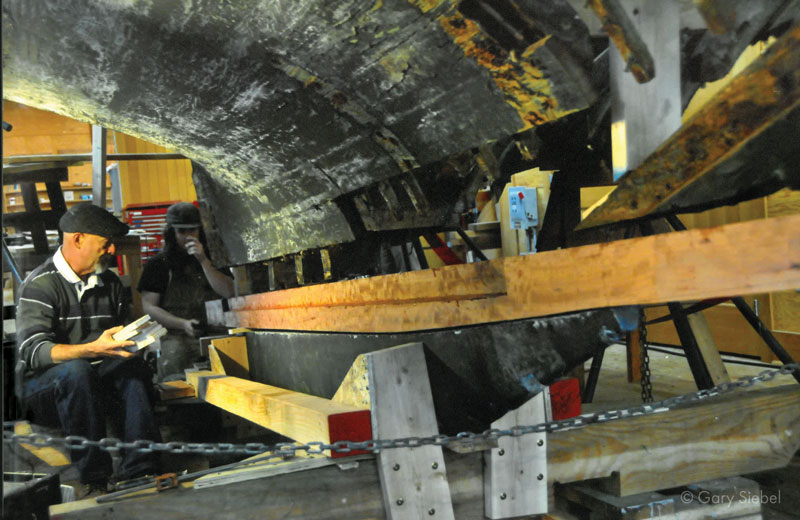 Today, we’ve become a throwaway society. Too often, we design light-duty stuff without good consideration of its use and are frustrated when it breaks. Things can’t easily be repaired so we often get rid of them and make new ones, wasting both money and materials. Outsourcing our work to machines in the name of cost control loses so much of the beauty, the spirit, and the craft. Many of us in the maritime trades have built our careers to resist this—to hold up the values of great design, great building, and long-term stewardship; and inspire a new generation to carry forward these ideals.

I was in the Northwest Maritime Center Boatshop on a Friday in 2013 working on Sean Renkens’ spidsgatter Cito and noticed a couple watching us work. The next Friday they were back, still watching. The third Friday, we struck up a conversation; Ollie and Janice Pedersen owned a spidsgatter, too, and wondered if we could give their boat a once-over. 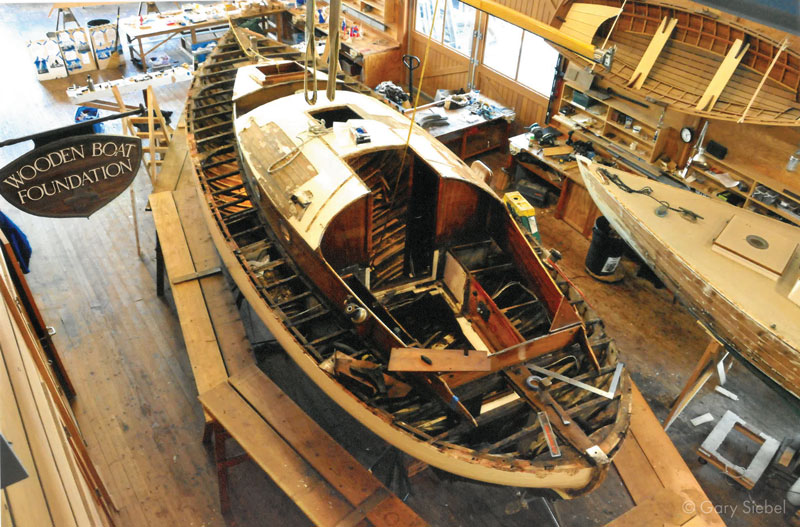 The next spring, we hauled Helma for the first time, touched up some paint and varnish, and got her ready for sailing season. We noticed a few things needed attention and so we started working with Ollie and Janice on a restoration plan. They wanted to be good stewards of this craft that had already given them so much pleasure on the water.

The plan was to put a new deck on the boat; it had been leaking and needed replacement. We had also found some iron sickness in some of the hull fasteners and a few planks that needed to be replaced. No big deal! When the deck started to come off, it became clear that the deck framing was also bad. We stopped, we called, we had a meeting, we looked at cost, and we also looked at how repairs would lengthen the boat’s life. Still, Ollie and Janice wanted to go forward. When we removed more of the framing, we found that the sternpost and the stem both needed replacement. Again, we stopped, called, met, and priced. Again, Ollie and Janice said—proceed! When the sternpost and stem came out, the keel was bad. This had become a total restoration. We knew then—it was all or nothing. 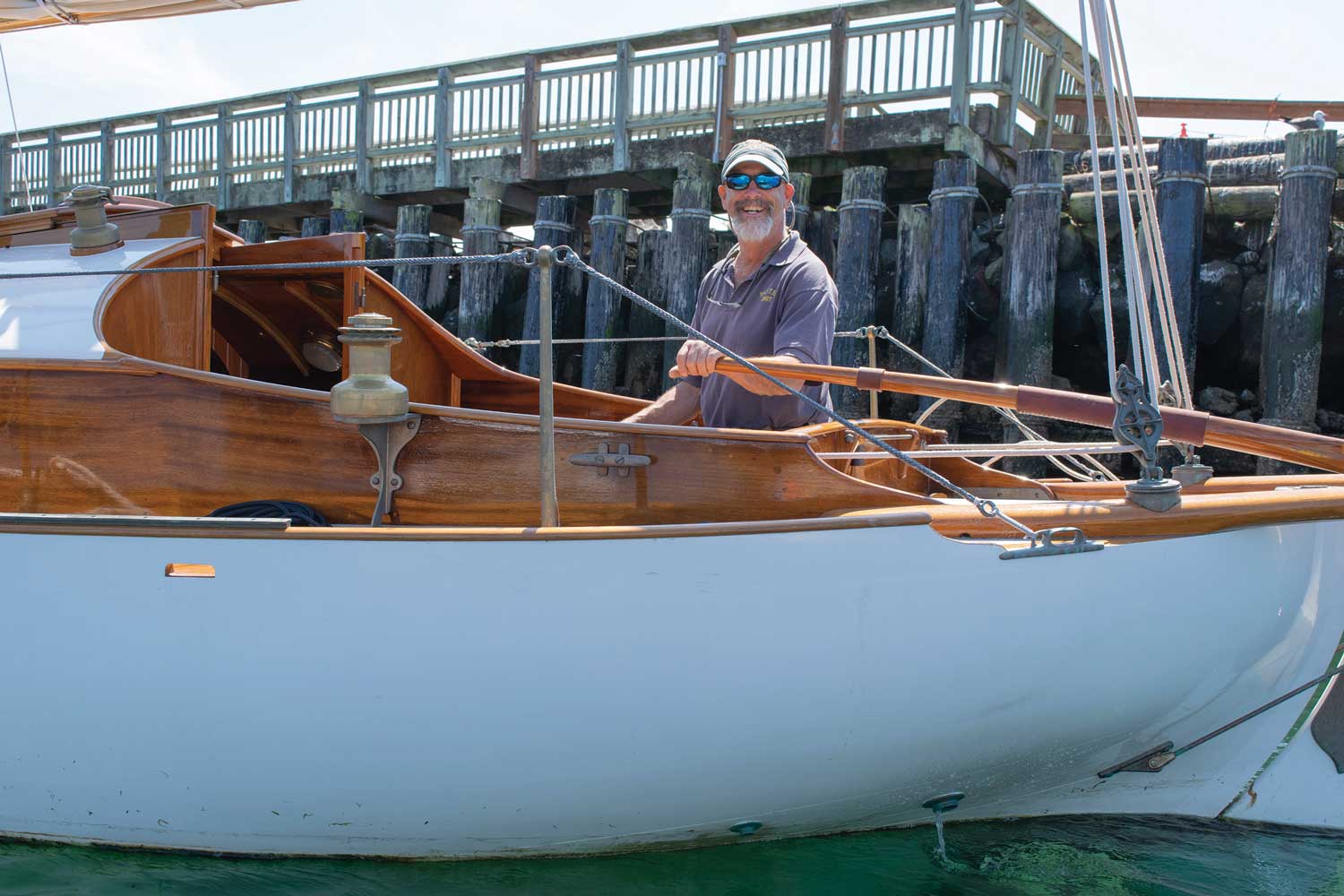 What resulted was one of the most rewarding conversations of my entire professional career. Cost was a factor for Ollie and Janice, of course. This would be a very expensive project, in money as well as time. Was Helma “worth it” in strictly financial terms? Maybe not. But when you look at the values beyond money, the project and the boat are worth their weight in gold. She’s a terrific example of the spidsgatter, a design with deep cultural ties to Scandinavia and the Pacific Northwest. The project was an opportunity for us to teach restoration to a new generation of young shipwrights. And most spectacularly, Helma provides an unparalleled opportunity to showcase the artistry and fine craftsmanship of boatbuilding, marine trades, and restoration. With these values in mind, Ollie and Janice said—go for it!

We essentially built a brand-new boat without lofting. We used the old structures as templates and slipped newly made ones in their place. We removed every other plank and used them as ribands to fit new steamed and laminated frames. We then re-planked, laid new decks, designed and built a new interior, and updated the rig. Many of the fittings and hardware were created and built by Port Townsend Foundry, and the mast tangs were built by Walt Tisdale. The mast was redesigned and rebuilt by Doug Jones of Traditional Boat Works, and Hasse’s team at Port Townsend Sails provided the all-new suit. These local craftspeople support one another in pursuit of our shared values.

As this goes to press, after three years of restoration work, Helma’s rigging is completed and she has just gone out for her first sail. We were all thrilled at how well she performed and how perfectly her form fits her function. After having a chance to strut her stuff at Festival this year, she’ll be headed home to Eagle Harbor on Bainbridge Island to be admired, cared for, and sailed for generations to come.