When I pulled up to the customs dock on San Juan Island on a sunny September afternoon, I was feeling good. Over the past six weeks, I had traveled some two hundred miles down Vancouver Island, traversed five major rapids, and used mostly paper charts to do it. Now, I had completed the final major crossing of my voyage. Haro Strait may be no big deal for a motor cruiser, but I’d made the passage under sail and oar alone, navigating over the millions of gallons of water coursing beneath my hull, avoiding towering ferries and tankers, and crossing an international border. Peering down at Row Bird, whose bow barely protruded above the dock, the customs agent was unimpressed that a small wooden boat could make such a journey. But I was. 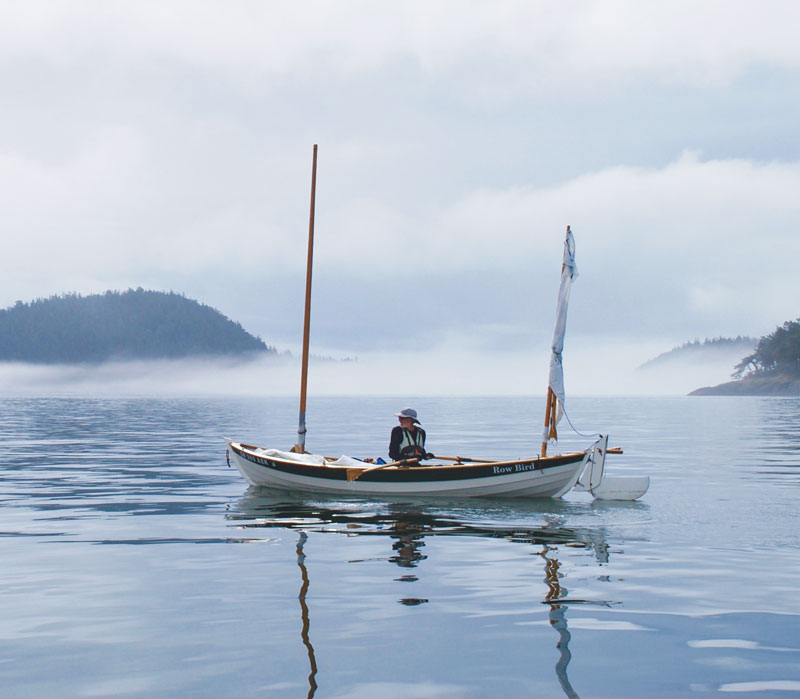 Since building Row Bird, we’ve been on many a voyage together. But I haven’t always been a wooden boat guy.

A longtime surfer, I was more familiar with fiberglass when I borrowed my first wooden craft from a friend, intrigued by the turn of its bilge and its historical-looking lines. The forest green Lake Oswego boat sat forlornly in his driveway, upside down, gaps beginning to appear between the planks. Still, my friend and I hefted the boat onto the roof of my car and stowed the oars. Before I drove away, he gave me some advice, or perhaps a warning: “You really have to love a wooden boat, or the work involved won’t be worth it. If you don’t feel the love, bring her back.”

The planks never took up enough water to stop leaking, and my two frisky little boys made it challenging to take the boat out much. I wasn’t in love. But the charm of those lapstrake planks and wooden oars stayed with me; and, with surfing fading into my past, I was intrigued by the idea of exploring the world in traditional craft.

During the next few years, as I tried out various boats, it became clear to me that I was searching for a very specific set of qualities: self-propelled, salty looking, reserve buoyancy for safety, big enough to sleep on, but small enough to avoid the necessity of mooring at a marina.

A few years later, a chance meeting with a new friend, Andy McConkey, led to the construction of a boat that met all my specifications—an 18-foot, lapstrake plywood, Oughtred-designed Arctic Tern. Now, after 10 years and with many voyages in my wake, I’ve learned that the Tern is a fun daysailer and an able cruising craft. Owning one has benefited my life in myriad ways.

First and foremost, Row Bird is my escape pod. Easy to launch, retrieve, and sail by myself, she rigs up quickly; it takes about 15 minutes to go from trailer to sailing. While other boaters are still tangling with shrouds and stays in the parking lot, I’m rowing away from the dock, my mind immersed in the wind.

Maintenance is easy with a Tern. I own Row Bird; she doesn’t own me. With just enough brightwork to flaunt her woody heritage, but not enough to be a chore, I actually look forward to applying the next coat of varnish. And since she’s dry-stored, bottom paint is never on my to-do list. Instead of winterizing her, I pick the choicest days, don my drysuit, and sail through the cold season.

I value the independence she provides, allowing me to get out as often as I like. I never search for crew. She can seat up to four people, but she really comes alive with just me; and frankly, I prefer it that way. The cockpit is just the right size, with three different comfortable places to sit, and Row Bird is a pleasure to steer standing up.

Unlike larger craft that are typically bound to the waters where they moor, Row Bird is easily trailerable. Each day, I have the satisfaction of going where the wind and currents are most favorable: the Willamette today, the Columbia tomorrow, the Salish Sea next weekend. Instead of paying moorage fees, I just roll her up my driveway at the end of the day.

What I appreciate most about Row Bird are the possibilities. Even day sailing, I know we could keep going and going under sail or oar. We can duck into a tiny slough, plow across a strait, or tack up a narrow river. For a longer cruise, I can comfortably pack three week’s worth of supplies in her lockers, as I did when I journeyed on the Inside Passage. With a simple cockpit tent, I can sleep aboard at anchor, but Row Bird can still be beached just for fun. Nothing’s complicated, which is just the way I like it. The oars work flawlessly, their quiet creaks and splashes making a pleasant soundtrack to every adventure (and they never stink or run out of gas like a motor).

In Row Bird, I feel close to the water. Each bump, each gust, each splash seems intimate. Although high enough and dry, I’m right down near the water, in the boat, not on it. We are one. We regularly sail the lower Columbia River estuary, where the afternoon sea breeze beats against the downward flow of the river, creating lumpy, challenging conditions. Secretly, I like the scary feeling that if I don’t pay careful attention, the boat and I could end up more in the water than I’d like—although we rarely do.

When I look at my boat’s components, I relish the stories and friends that come to mind. The thwart is from an old bleacher, salvaged from a high school in Bellingham by Row Bird’s builder, Andy. Woodworker Bill Wessinger and I rebuilt the floorboards. When I look at the sails we made, I’m grateful for sailmaker Andy Bike’s sewing lessons. The nick in the gunwale takes me back to a windstorm and the debris that came flying at me that day. The French whipping on the tiller holds sweat stains from a frightening crossing of the Strait of Georgia. And the boat’s name evokes the memory of my mom, Roberta.

Someday, I may be too old to raise her mast alone, hoist the sails, or row against the current. When that happens, I’ll know it’s time for a different boat. But for now, I anticipate many more years of adventuring with Row Bird. For now, I’m still feeling the love.

Bruce Bateau sails and rows traditional boats with a modern twist in Portland, Ore. His stories and adventures can be found at www.terrapintales.wordpress.com