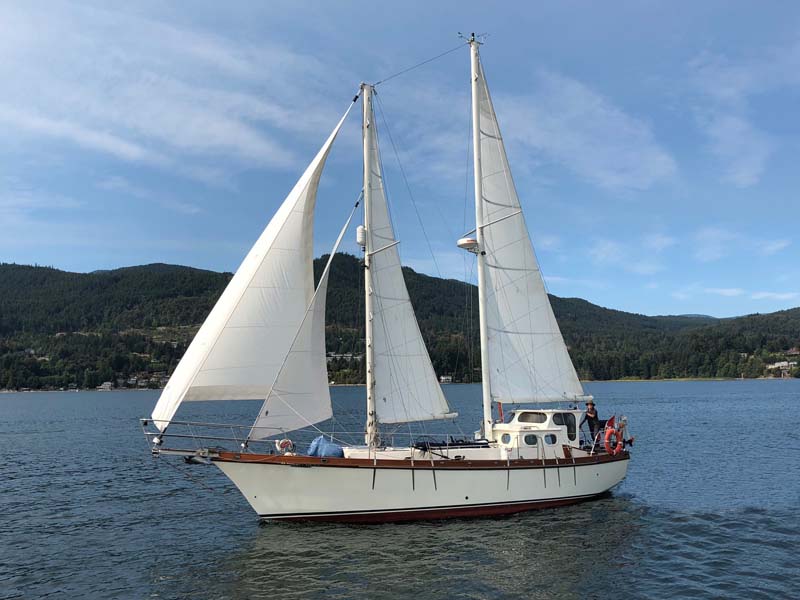 Wind Gypsy is a Brandlmayr 41 schooner. (48’LOA) She is one of a kind in many ways. She is the only schooner, we know of, of this design, built by John Brandlmayr. Mr. Brandlmayr designed many boats. We were told, Wind Gypsy is the culmination of all his best ideas for a Trade Winds clipper, from his years of experience.

There are many unique features to Wind Gypsy. She is very heavily constructed of marine plywood – each piece is 41’ long – over an equally heavy frame. This wooden boat was covered with fibreglass/roving using isophthalic resin. She was built and finished in two stages 29 years apart, so while the hull was completed in 1967, she was stored in a shed before she was professionally finished and launched in 1996.
The story goes that while stored in the shed, the original engine was left beside her still in the crate. When it was finally time to install the engine, many years later, it was discovered to be missing. A new engine was found on the East Coast of the United States, bought still in the crate and shipped to Vancouver. The crate was put down in the same spot as the original and everything looked so close, the serial numbers were compared and it was found to be the very same original engine. Destiny?

We purchased Wind Gypsy in July 2018. We believe we are the forth owners of this boat. She was named Phillip William as a tribute to the father of the second owner, who died in the Battle of Britain.
There is still a lot we don’t know about Wind Gypsy, but we continue to learn from her every day. We stay aboard and sail her whenever we can. She has proven to point better and is quicker than expected but very stable and seaworthy.

Her condition is remarkable and her looks attract attention wherever she goes. Her teak decks are flawless, and inside the light floods in to showcase quality and condition that is evident everywhere you look. A very comfortable living space that could take you anywhere you wish.

We believe we might have the first Brandlmayr schooner presented at the Port Townsend Wooden Boat Festival, if accepted.