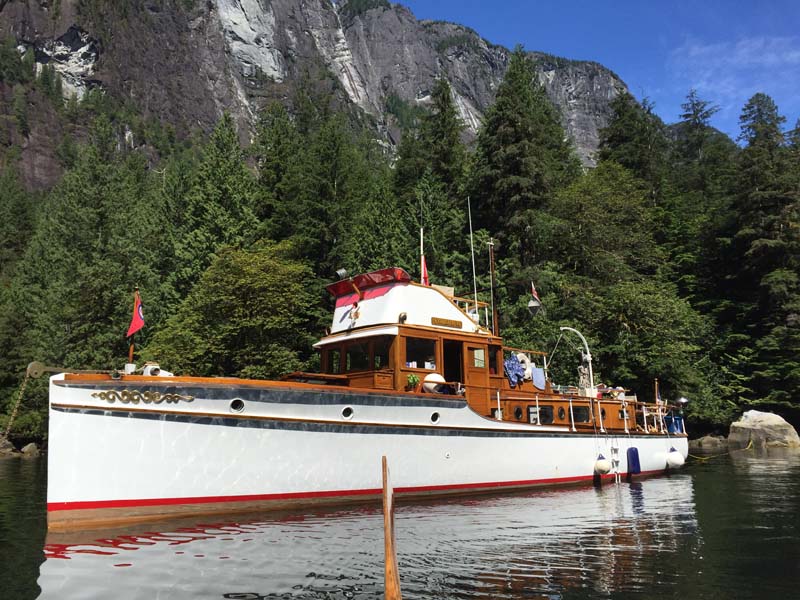 Bob Bryan who lived aboard for 17 years, and son Brandy , who grew up on the boat and is now a career naval officer acquired her in 1979. In 1986 they cruised to Vancouver to participate in the World’s Fair Maritime Exhibit. In 2001, fortuity came into play for Sally and Bob, when explaining the boat to neighbors, the lady said, “I’ve been on your boat and I dated a guy that was a live aboard. He had it beached on the ship canal. She provided photos as proof.

The original owner’s grandnephew visited with stories of the boat’s 1920’s adventures, including the fact that she had been commissioned for mapping in Alaska. It brought dimension to vintage photos of fur coated men and women with rifles on deck and another shows the hull badly scraped having been sucked into a fish weir by current.
When asked how she handles in rough seas, Bob says the obvious: “That’s what she was built for. She always comes back right side up”.

Rumrunner? An old fisherman in Pender said: “I know your boat. She had a foot well in the afterdeck where those planks are strangely butted. When I was a kid guys from the Olmstead gang came in on her with women mad because they were drunk. The men left to find a bar. The women invited us aboard. We partied until the men returned and we ran like hell!” [Olmstead -Seattle Police Captain was convicted of tax evasion during Prohibition. His wife broadcast radio children’s’ stories which contained coded drop point messages.]

The Corsair remains a blessing for Sally and Bob. Sally signed on after a chance meeting in the Ballard locks thirty years ago – love at first sight with the Corsair… and Bob. They have been anchoring in the damndest places together ever since.