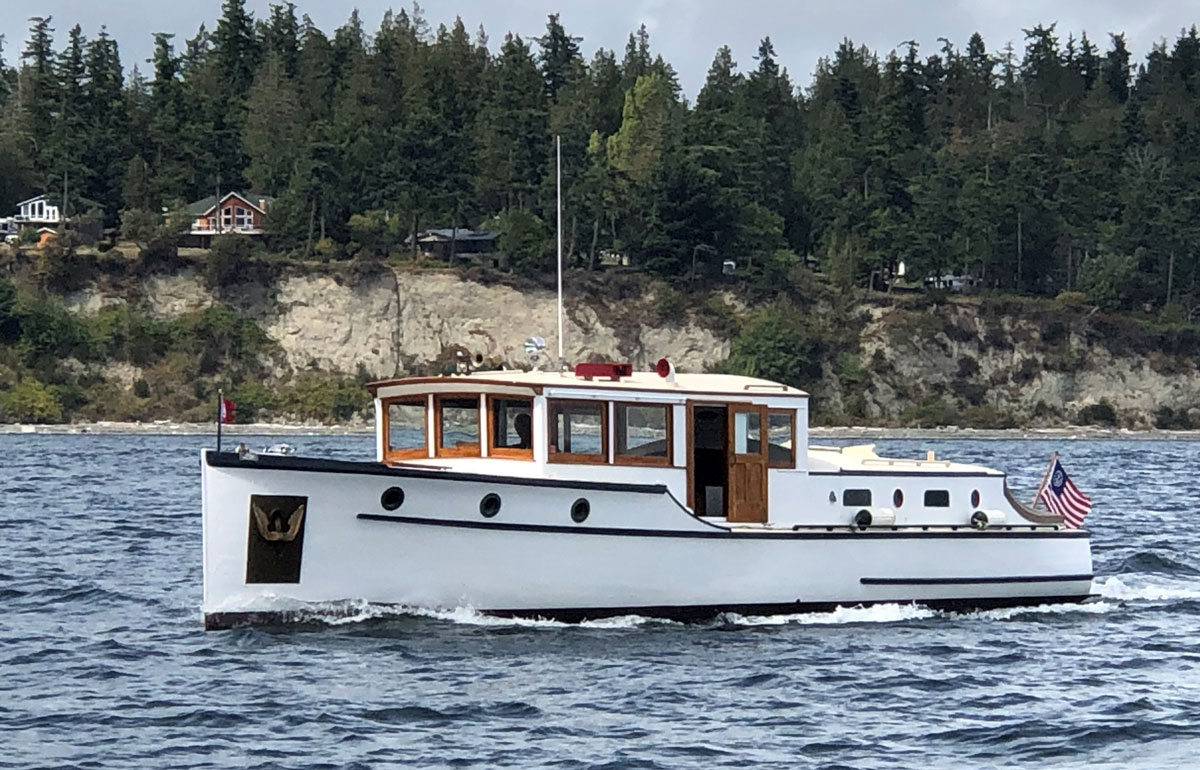 By Pete Leenhouts, owner
RIPTIDE was built in 1927 by the Schertzer Brothers Boat and Machine Company, then located on the north shore of Lake Union near the foot of Stone Way in Seattle. She is planked in Port Orford cedar, copper riveted to white oak frames over an Apitong backbone with a marine plywood pilothouse and a western red cedar trunk cabin. Although there are no records extant confirming her designers, tantalizing hints in her lines suggest she may have come from the boards of the Seattle firm of Lee, Brinton and Wayland.She was registered as NOKARE by her first owner, renamed NERIED a few years later, and in 1934, renamed again by long-time owner Russ Gibson to RIPTIDE, the name she carries today.

RIPTIDE’s guest book from 1930-1936 survives, and indicates she was used and enjoyed extensively, cruising on Lake Washington, through the Ship Canal, and as far north as Victoria, BC, often carrying quite a number of guests. RIPTIDE was extensively modernized in 1936, and pictures and a description of the improvements appear in the June 1936 edition of Pacific Motor Boating. Comments in issues of Pacific Motor Boating magazine throughout this period indicate she was cruised extensively and participated in a number of long-range predicted log races as far north as Nanaimo, British Columbia.

She was purchased in 1965 by a Forest Service employee who took her north and used her for several years as a cruiser, U.S Forest Service crew boat, and live-aboard in Southeast Alaska. She returned to the Puget Sound in 1968.

RIPTIDE is fortunate to have been owned by knowledgeable and caring owners throughout her long life, particularly Russell G. Gibson and, successively, the brothers Richard F. and Roger Billings. She’s hosted at least three marriages and dozens of family outings from Olympia, WA, to Juneau, AK, and beyond over her long and happy life.

It was obvious that RIPTIDE’s interior configuration has been changed several times. The June 1936 issue of Pacific Motor Boating magazine noted the extensive interior work Russ Gibson had accomplished, observing that he’d “…found an additional eight feet” in the boat”—and just what that means remains a mystery. Certainly, her interior arrangement, while of the same materials as other Schertzer-built boats, is unique among existing Schertzers.

She was extensively overhauled by the Port Townsend Shipwright’s Co-Op in Port Townsend, WA, in 2015 under her current owner, with updates, some quite extensive, every year since then. Shipwrights Jeff Galey and Paul Stoffer have done the majority of the work, with support from the wide variety of expertise available at the Co-Op.

Shipwright Erik Fahlstrom paneled her pilothouse interior. Diane Salguero and crew maintain her paint and varnish both inside and out, and Pete and Kathy Langley, owners of the Port Townsend Foundry, have supplied the new bronze throughout the vessel.