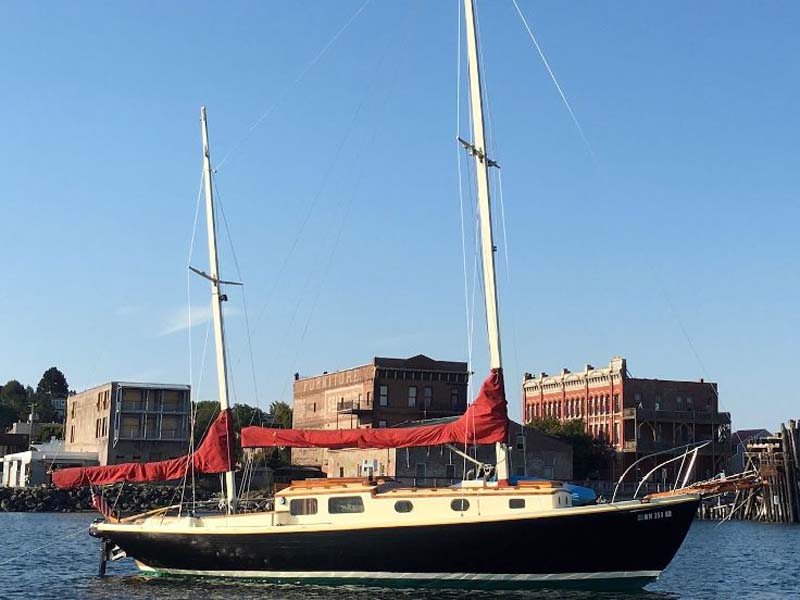 History: Maggie Jane is a Herreshoff H28 modified (29’ with added doghouse and bowsprit). She was home built and originally sailed in Lake Michigan in the late sixties. Hull construction is mahogany strip planking, edge glued and fastened. A slow, on and off, 10 year restoration was recently completed by the current owner and included reconstruction of the cabin, interior, deck, cockpit and rig.

She was home built by the Egger family in Grand Haven Michigan in the late sixties, originally christened the Margory Jane, and sailed/cruised all over Lake Michigan. She was sold in the late seventies and brought out to the NW where the bowsprit was added and the name changed to the Captain Pierce. Very little is known of her ownership and whereabouts during this time but she, presumably, went through a succession of owners, some good and some, perhaps, not so good ending up in 2008 as an abandoned half sunk derelict at a Lake Union marina.

When I found the listing on Craigslist a young man had recently acquired her from the marina and had stabilized her but was quickly running out of time and resources to complete the project. A quick trip to a cash machine complete the foolish emotional transaction. Fresh rain water had taken a serious toll on her rig, decking, cockpit and cabin and interior but the hull appeared reasonably sound. She was towed to Vashon Island where a ‘temporary’ shelter was constructed over her and repairs conducted while primarily in the water. While restoring her at my home would have made more sense, I feared that, if I brought her home, she would never see the water again. I have too many friends with unfinished boat projects at home.

Restoration: The work was extensive including tearing out and replacing a third of the deck, the cabin sides, the entire cockpit, and cabin interior. The masts were reconditioned, new standing rigging installed, and the rudder and bow sprit rebuilt and the boat rewired. Hull work was fortunately limited to only sistering several frames and replacing some planking and transom framing. Early in the project I was contacted by a David Egger in the Midwest. David was the son of the original builder and had located me through correspondence with 48 North. David’s parents were now deceased and, at the urging of their daughter, he and his wife had set out to find the boat and what might have happened to her.

For 10 long years David and his family and friends living in the Midwest, patiently followed my restoration process through occasional emails and photos. This long distance reconnection culminated in the Egger family joining us in the summer of 2016 as our guests on Vashon Island for an inaugural sail on the newly rechristened Maggie Jane (the name gives some homage to David’s mother Margory Jane who the boat was originally named after).

We had an emotional sail on Quartermaster Harbor that day where two families, previously unknown to each other and living thousands of miles apart, came together to celebrate the rebirth of the boat after 50 years. The work was not complete however and life kept getting in the way. Maggie was kept under wraps in the marina for two more years and finally “finished”, at least to her current state, in the summer of 2018 and sailed up to the festival, her first time out of harbor. She now sails actively on Quartermaster Harbor on Vashon Island with occasional overnights. Future work includes new canvas, sails and the possible installation of an inboard diesel.