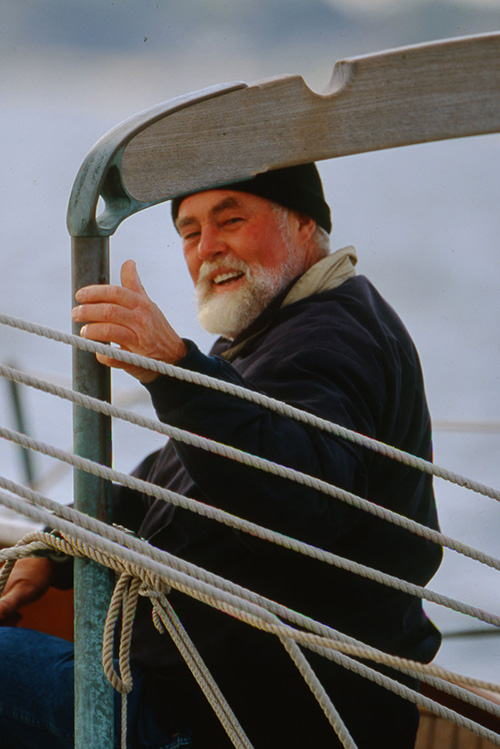 “An amazing sailor. He did it all,” wrote one magazine editor. “Raced boats, delivered boats, built two boats, sailed them engine-free around the world, both east about and west about. Rounded the great southern capes against the prevailing winds…”

“Amazing boatbuilder,” wrote another. “But he’ll be remembered for his motto, go small, go simple go now, inspired thousands of would be sailors to get out there and try it.”

Since Larry took his final voyage a few weeks ago, I have been almost overwhelmed with the tributes admirers have shared with me. Many bring tears to my eyes as I recall the 55 years of our hugely rewarding partnership. I use the words partnership instead of marriage for two reasons. We were only legally married for 52 of those years. And second, if there ever was a true partnership, it was the one we shared, from building our boats together, to working as a delivery team, wandering the world for more than 35 years in the intimate space of boats under 30 feet in length, building a home base in New Zealand then writing 10 books as a team.

Larry truly earned the accolades that I read. But these tributes only describe the man other people saw, big, bold, determined, generous. The Larry I knew so intimately was far more complicated than this.

Larry was a man who kept every promise he made, and a doer who knew how to dream. On our first date in Newport Beach, California, two days after we met, he took me to see his keel timber, the first piece of the boat he was building. He sat me down on the loft floor saying, “you are in the cockpit.” Then he walked along the 30-foot long full-sized drawing of the boat plans, stopping to point out where a coachroof would someday sit, where the mast would be, then the bow. He extended his arm forward and, with a far away look in his eye stated, “And then there will be a seven-foot-long bowsprit to point towards the horizon.”

“That was a wonderful day, almost like an adventure” I said as I prepared to leave for my home near the edge of the California desert 100 miles to the north.

“Stick with me baby and you’ll go a long way,” he replied.

He definitely lived up to his promise.

When we’d been living together for about three months (I moved in with him a week after that second date) Larry was working three days a week on the boat, four as skipper on a 20-ton charter ketch, I was working as a computer tech five days a week and boatbuilders apprentice 2 days. One of his mates came by. He had sailed as engineer on the 85-foot Schooner, Double Eagle while Larry was first mate and the late Bob Sloan skipper during a four-month movie charter trip to Hawaii. The two men began recalling stories of their voyage. “Did Larry ever tell you he was dating a movie actress and she almost convinced him to come back to Hollywood with her because she had arranged for him to get some acting work?” Ken went on to tell me how Larry had dated Diana Hyland for a while. Later that night I asked Larry why he hadn’t taken her up on her offer. “I didn’t want to pretend to do things. I wanted to do them,” was his succinct reply.

Where other men might have been ego driven, Larry wasn’t. Maths and geometry are like a toy to me. Not to Larry who took an extra year to graduate from high school. One day he was trying to line out the topside planking of the boat we were building. I asked him what he was doing. He explained how hard it was to get the right spacing so the lines would look fair and handsome. I thought about it for a few minutes and suggested a mathematical solution. “Let’s try it,” he said. A few months later I happened to be inside the boatshop cutting woodplugs when one of Larry’s mentors came by to check our progress. “Nice job of lining out,” Roy Wildman said. Larry didn’t hesitate, “Lin showed me how to do it.”

Larry was the master of quips. One day when I was trying to drive four-inch nails into my very first wood working project, a set of saw horses, I threw the hammer half way across the boatyard in frustration. He calmly picked it up and stated, “If it was easy, everyone would be doing it.” That became the motto that underlay our lives together.

Larry had very high expectations of himself, encouraged the same in me, while at the same time being very careful not to dent my self-esteem. After three and a half years of working together we finally set off on our first ocean passage on the boat we’d built. The second day out, a hundred miles south of San Diego, I became horridly seasick. I was laying on the cabin sole, bucket nearby, feeling sure I’d ruined both our dreams. He set the windvane, came down below and sat on the floor stroking my hair. “Remember, Lord Admiral Nelson got deathly seasick every time he went to sea,” he stated.

Larry was first and foremost a sailor. Where other people went cruising to see the world, Larry went to sail. Nowhere in the world was he more relaxed, at peace and fully alert than when he untied the lines and felt the boat begin to move away from shore. He loved every aspect of keeping a boat moving under sail. He seemed to be able to sense exactly what was happening to the wind, the sea, the sails, even if he was down in his bunk. “Lin how about checking to see if you can ease the headsail just a bit, I think the wind has backed,” he’d often say when I popped down below during a night watch. He was always right.

Though he grew impatient with long drawn out conversations about politics, and avoided what he called, self-indulgent intellectualizing, he was a voracious reader of history. “That’s why I love going to sea,” he often said to me. “Only chance I get to dive into books like this.” Like this meant Winston Churchills history of the English speaking world or any of Barbara Tuchman’s probing tomes.

“I’d make a lousy teacher,” Larry often said to me. But in the end, that is how some of his most loyal friends saw him. He taught literally hundreds of young boatbuilders tricks to keep them motivated. He refused to splice anyone’s wire rigging, instead teaching them how to do it themselves. In spite of being uncomfortable with public speaking, he gave wonderful seminar talks on subjects really dear to his heart, from how to make a boat easier to sail to how to weather storms at sea. When I asked three of the men he mentored when they were youngsters dreaming of building boats, “What do you remember most about Larry?” Each one said it was his generosity as a teacher. When I mentioned Larry’s reluctance to be seen as a teacher, Peter Legnos, who came to live with us on board 24 foot Seraffyn for six weeks when he was just 18 stated, “but that was Larry’s genius, he chose his students carefully.”

Larry had a fine sense of the humor and could be amazingly adaptive and supportive. As my writing career grew and people began recognizing me when we sailed into a new port and before he began writing too, we happened to run into one of his old friends, a woman who was highly engaged in the emerging feminist movement. “Lin, you are losing your own identity,” she stated firmly. “Every sailor I meet refers to you as Lin and Larry. You have to change this.” I shared this with Larry. “Why try and change it. I like you being first.”

The Larry I knew was a complex man, complete with flaws such as his impatience with any paperwork, any bureaucracy that stood in his way; impatience with people who saw only stumbling blocks when he could see the same blocks as ones that could be used to build a solution. His determination, which was one of his best attributes was also one of his worst. It could sometimes drive him to exhaustion when, if he’d backed off for a while, he might have found an easier tack to take.

At the same time, he was fully aware of his good fortune in life, being raised by loving parents, and with grandparents who introduced him to spirituality and inventiveness. The luck of having hands which naturally seemed to know how to shape wood to his will. And the blessing of finding a life that let him state near the end, “I did everything I ever dreamed of doing and more.

I had the good fortune of sharing Larry’s life and gained tremendously along the way. He showed me how to make and keep friends. He taught me to have confidence in myself, to stretch my horizons, to start both small and big projects and actually finish them. I remember one time when we had just brought a large ketch alongside a rough jetty. He climbed off and turned to give me a hand. I hesitated as I looked down at the three feet of water separating the boat from the dock. “Jump, I promise I’ll catch you,” Larry stated. I did, then and many times afterwards; he always caught me.