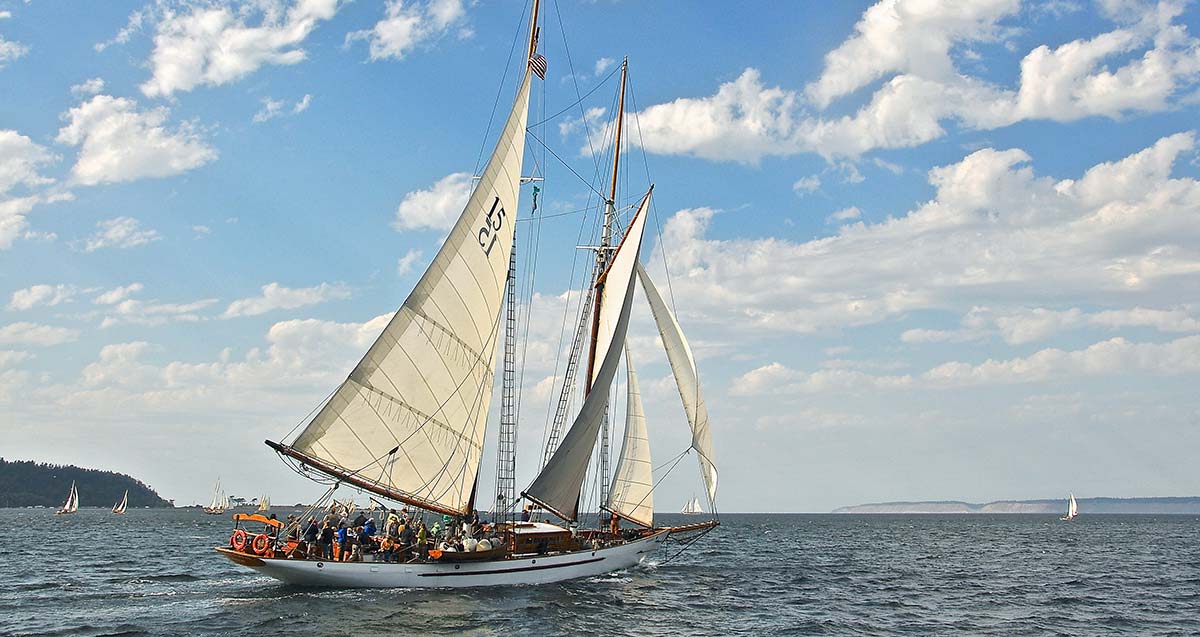 It’s Maine, the dead of winter. A young shipwright at Rice Brothers Shipyard in East Boothbay Maine kneels and applies pressure to the hand brace screw driver and snugs the deck screw into the new plank. The schooner Adventuress must be ready for launch by February of 1913.

One hundred and six years later, a shipwright at Haven Boatworks in Port Townsend picks up a cordless drill and using a tapered counter sink quickly drills a hole into the deck plank; a screw gun drives the bronze screw home. The schooner Adventuress must be ready for launch by April of 2019.

Sound Experience is the nonprofit that owns and operates the 133-foot National Historic Landmark schooner Adventuress. Its education mission reaches more than a thousand children and teens annually, and engages the public in issues about the health of the Salish Sea. It’s what keeps this beloved Puget Sound tall ship relevant to the lives of those who live and work in the region. Education is what keeps Adventuress sailing.

In 2006, however, the future of Adventuress was uncertain. The ship was on the hard with a starboard-side repair that threatened to delay the program season, and the organization owed the yard some $120,000. With a lot at stake for the ship’s future, some “emergency funds” were contributed, and over the next 18 months Sound Experience paid-off the remainder to the yard. It was a challenging time, but the ship was back in the water in time for education programs that year.

A new director was at the helm, and the Board of Directors re-committed to ensuring a future for the beloved historic ship despite the impending restoration costs. A plan to restore Adventuress by her centennial year was envisioned and the Centennial Restoration Project was launched. From 2009 through 2014, the organization completed five distinct phases–during the “off season”–with major financial support from foundations, individuals, the National Park Service and Washington State’s Heritage Capital Projects Fund. Scores of volunteers also supported the project. While the goal of completing the hull by 2013 was missed by just one year, the entire ship’s hull was renewed by the following year, including 576 frame sections and 5,550 feet of planking. The project also included replacement of the ship’s massive stem and the horn timber, rudder and transom. 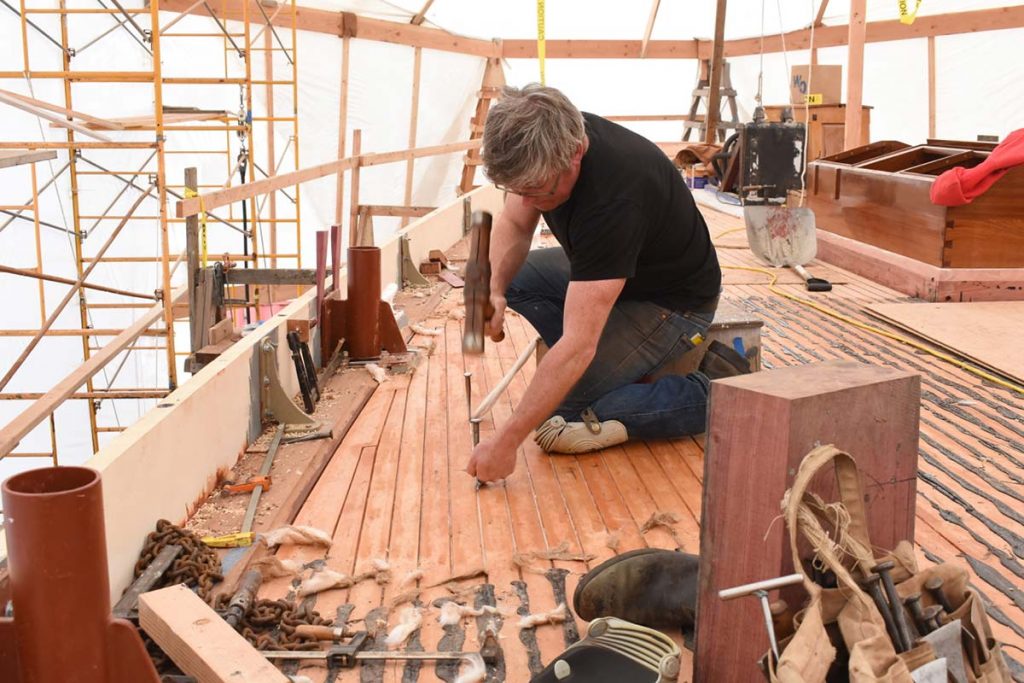 For all restoration phases, Haven Boatworks in Port Townsend provided the skilled shipwrights and ships carpenters, as well as the expertise required to restore the 1913 schooner. Edensaw Woods, also local, provided the specialized woods needed for the project.

With the completion of the hull, all that remained was the replacement of the engine and the deck. The 101-food deck would be arguably the most complex and costly phases, estimated at $1 million. Sound Experience’s board and staff envisioned a final capital project for the century-old ship–The Capstone Deck & Repower Project. The fir needed was sourced by Edensaw Woods from British Columbia in 2015 so that it would have time to dry.

In 2017, it was decided that the repower and the deck projects would be split into two phases due to timing and availability of federal and state capital grants. Adventuress was the top-ranked capital project for state Heritage Capital Projects funding, but the funds were not available until 2018. The winter of 2017-18, the first phase, the repower, saw the installation of a new John Deere Powertech 6.8L engine with generous support from the Puget Sound Clean Air Agency, foundations, and individuals.

Adventuress was hauled for the final part of her restoration, the second phase–the deck–in October 2018. In under two weeks, a team of Haven Boatworks shipwrights removed the clamp, deck beams and deck planking. Over the next four months, with roughly 9,000 hours of shipwright labor, new Sapele clamps were bolted to the frames, 57 Purple Heart deck beams were installed, and the new Douglas Fir deck was fastened in place. 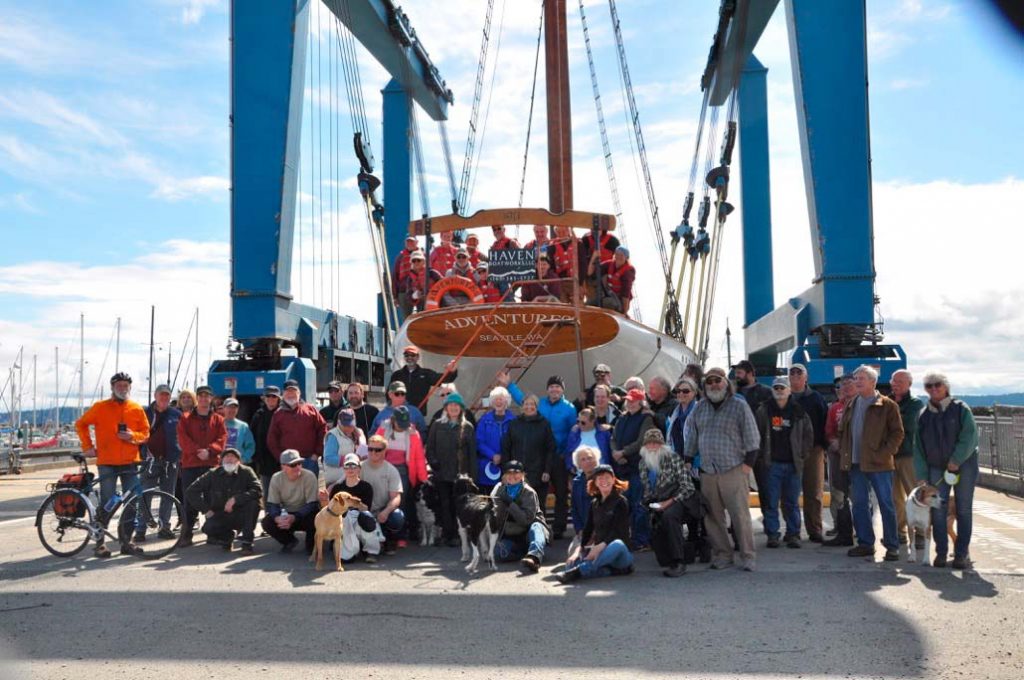 The decade of restoration, made possible by the support of private foundations and individuals, and state and federal capital funding, guarantees that Adventuress‘ mission of fostering environmental sustainability, youth development, and maritime careers through powerful shipboard programs will continue for many decades. Adventuress will continue to sail “not for one, but for all.”

Please stop by and visit Adventuress during the Wooden Boast Festival at City Dock across from City Hall. The ship will be open for dockside tours Friday, September 6, from 9–10 AM. To sail aboard Adventuress during the Festival, visit www.soundexp.org, stop by the Sound Experience booth at City Dock or call 360-379-0438 x1. Click here to find out about all the ways you can get on the water at the Festival!