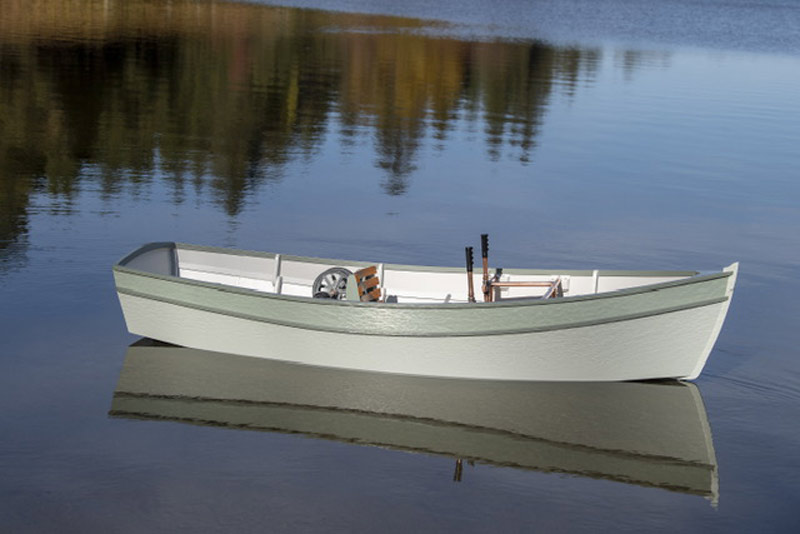 Clatawa is a nine-foot flat-bottomed skiff from the design boards of Edwin Monk, who wished to give people with basic woodworking skills and a few sheets of plywood the means to build a simple rowboat to go fishing in. I found a set of these circa 1940s plans and built the skiff with quarter-inch Okoume. I took several liberties with the design to arguably improve its appearance.
I have a strong interest in unconventional human-powered boats and enjoy sketching offbeat propulsion systems. My main objective in this example was to find an alternative to rotary input (i.e. bicycle pedals) which virtually everyone who builds these vessels employs, including me with my double-ended canoe named Hiyu which I bring to the Festival every year. Clatawa utilizes reciprocating foot pedals and hand levers which provide linear inputs much like an elliptical exercise machine.
I had a great deal of fun puzzling out the challenge of converting linear movement into rotary motion. In this case, the push-pull action from the skipper pulls a rope back and forth which turns a pair of drums mounted on one-way “sprag” bearings. The drums rotate a shaft placed athwartship in the hull. Large pulleys located on the shaft distribute this motion to two smaller shafts running fore-and-aft, one being enclosed within the other, in the center of the boat. Vee belt pulleys on these central shafts turn in opposite directions and supply power to the port and starboard propeller shafts, which rotate twin screws in opposite directions, in proper powerboat style. The Captain’s chair has furnished with a lever on either side, each controlling a clutch which shifts its accompanying propeller shaft into forward or reverses. Steering is accomplished this way, so the boat is not provided with a rudder.
This rather dry description betrays the light-heartedness of this admittedly impractical design, which I concocted for the challenge and pleasure of getting from here to there using simple mechanical devices. Whether the boat is cool or laughable is unknown until people have a chance to react to it. I have a difficult relationship with computers but am at home with mechanical stuff, which I hope Festival-goers will find refreshing.
Clatawa is a Chinook jargon word meaning “to go.” I was tempted to name the boat “Rube,” after Mr. Goldberg, but was afraid anyone under 60 wouldn’t get the joke.