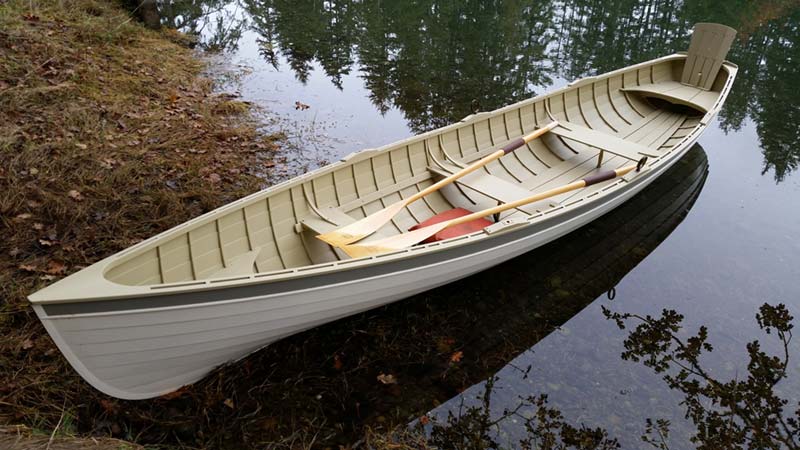 Every now and again, we build a boat for ourselves. We wanted a good rowboat, which meant it had to meet several criteria:
• It had to row very well.
• It had to be lightweight for its type.
• It had to have a traditional appearance.
• It had to be a relatively quick build so I could get back to projects that made money.
• It had to be fairly inexpensive.
• It had to trim well rowing single or double, with or without passengers.

We have long admired the Lake George Boats, and decided to base our design on the WINONA from Mystic Seaport’s collection of small boats. The Gig Harbor BoatShop built a replica of WINONA a couple years ago, and I had a chance to row it briefly. I found that the hull had more than adequate stability, and carried between strokes very well. She was slow to turn, like any long pulling boat with no rocker. We began by making a 1:8 scale half-hull model of WINONA, then modified the model to reflect the new design, which was named EBB. We trimmed the beam to get the beam to length ratio to be less than 1:4. This reduced the stability, while also slightly reducing the weight and wetted surface for less drag. We kept the nearly circular midship cross-section. The beam at the transom was greatly reduced to be less than 45% of the maximum beam. This, combined with the low beam/length ratio, categorizes our design as a “”canoe, kayak, or similar watercraft”” in the eyes of the USCG, simplifying certification of the new design.

The stem profile was straightened a bit to suit our taste. That lengthened the waterlines slightly. The dead-straight keel was modified to have 1″” of rocker at both ends. This will help maneuvering in tight spaces, and make exiting onto a beach a little easier. With the revised model completed, templates and measurements from the model were used to create a scale lines drawing, from which offsets could be taken in order to loft the boat full-size. Construction details were drawn on the lofting, and the molds and stem and transom patterns were made.

All the scantlings were reduced, and much lighter species of wood were used. Where the original boat had oak, we substituted yellow cedar. Fir was replaced with spruce. Pine was replaced with red cedar. Quarter inch cedar planking became 4mm Okoume plywood. The resulting build will not be as durable as a boat built more heavily, but this boat will be used by us, and will be handled carefully. EBB will be a test bed for new ideas in construction and interior arrangement. The thwart arrangement is a bit of an experiment (something I can’t do with boats built for others). The center thwart is located just aft of amidships, which is optimal for trim. The forward thwart is farther forward than usual, and the aft thwart is farther aft than usual. This should maintain trim with two rowers, without the need for adding ballast. No heel stretchers are required, since feet can be braced against the thwarts and stern seat.

Having three thwarts does crowd the interior, especially at the bow seat, but there a plenty of options for seating, and the bow seat is really only intended to be used a step when boarding from a beach, or perhaps used as a seat by a child (or a dog).There is no varnish. We used a satin enamel for the interior, and gloss enamel for the exterior. A simple finish, stored out of the weather, should require very little maintenance.”