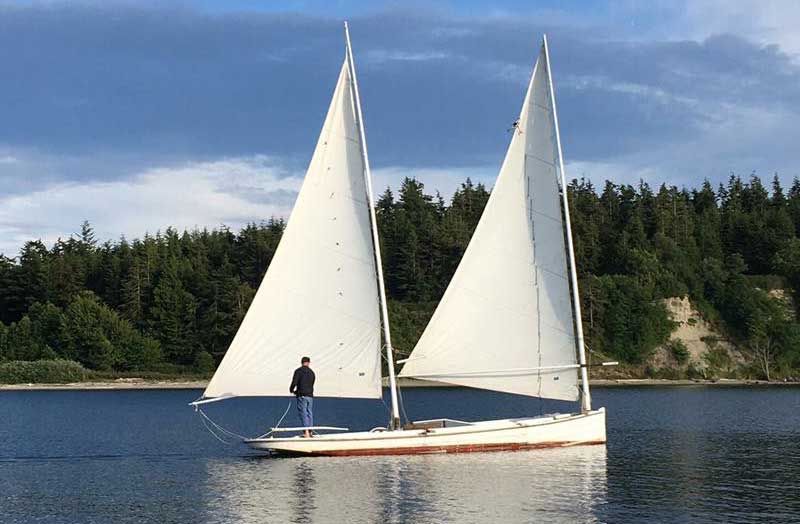 Built in Anacortes in 1977 (same year as the first Port Townsend Wooden Boat Festival) by a 20 year old aspiring boat builder named Bo Garrison who took the lines from Chappelles American Small Craft. The boat’s design is an evolution from dugout canoes, and came into service for watermen in Long Island Sound for ease of construction, speed, ease of handling, and shoal draft- which made it ideal for tonging for oysters.

The rig is consists of two solid, unstayed spars, with sprit-booms that are tensioned with “snotter lines” against lashings on the mast. Oddly, the sails reef vertically; the snotter lines are eased and the luff of the sail is gathered at the mast. Honestly, it’s a pretty bad system since you have to strike the sail, tie every reef point as you re-raise it, and what you are left with is a bunched up sail as the leading edge of your sail. Eventually we’re going to get around to changing that.

A modern adaptation of that hull form, the Betsy D was originally named Transit and had a full cabin, and the builder cruised it extensively in the Salish Sea, making it as far north as Desolation Sound. In 1983 it was donated to Seattle’s Center for Wooden Boats where it was a long serving member of the fleet, primarily as the public sail vessel; every Sunday it would take people sailing in Lake Union free of charge. The current owners, Jake Beattie and Jean Scarboro, fell in love with the boat while employees there, and when they heard it was being surplussed jumped at the chance to be its caretakers. They traded a Port Madison pram for the boat and set in on a year long restoration. They both now live in Port Townsend and camp cruise it with their daughter in the summers.